So I brought my Lambretta down to Calgary for my friend Daaren at Benzina to look at and give an honest opinion.

Well, without getting too far into the heartbreak, there was some significantly bad news, but at least the good news outweighs it for now.  (Does anyone else get the distinct feeling this is going to start costing me some real dough?  yeah, me too.)

So the frame and forks aren't in ideal condition (leaving it at that).  I'm now looking for replacements, but luckily there seems to be at least a few floating around right now.  I'll probably end up dressing up an LI frame  as a TV, and maybe in the future if I get my hands on a TV frame I'll switch it all over....and then I would have an LI frame to make a skelly with, which I'm sure would upset at least a few people, but whatever.


I think the Lammy Gods felt they tested me enough this weekend, and they probably have more testing in store, but they decided to shine on me yesterday.  I was thrilled to get my LCUSA magazine in the mail AND a parcel pick-up slip.  The parcel?  MY HORNCAST.  I thought it was a little overpriced until I got it today and found out it's NOS!!!  Yay!  I also got my Sticky's manual, super fun!

That's what's going on right now with it all, I'm going to shoot off some emails about parts now and see what happens.

I got my bridge piece!

Finally customs has released my bridge piece.  It's kind of bent up and rusty, so at least it matches the rest of the scooter.

Not really in the mood to write more.  :\

At least that's good news though. 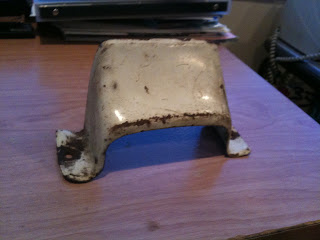 Today was a productive day.  After much sweating and cursing last night, and wondering what parts I need to pull off just to get those effin legshields off, I did it!   This is good because I've found a gent in Niagra who is wanting to trade my legshields for a horncast.  Win-Win!  I hope, anyways.  They're in very rough condition, so I hope he is aware of how rough that actually is.

My scooter-guru-friend Angelo suggested I take the headset off to pull the legshields off, which would have been preferable, except I have no tool for the giant hex nut (?) at the bottom of the headset.  I'm not sure, but it seemed instrumental in headset removal.  That's fine though, because I managed to gently squeeze the legshields off around the frame, as was also suggested.

I'm still waiting for my bridge piece, hopefully it will be here soon.  :D

Here is a picture of my three lucky, non-italian-parts, washers/pennies.  Um...not really sure what to say about that. 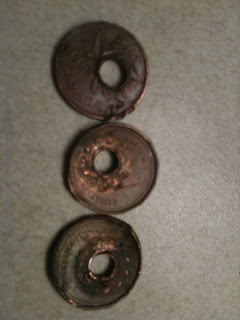 Posted by Modrey at 3:08 PM No comments:

So I got my Christmas bonus from my boss today, $400!  I consider it a gift (and I think all people who get bonuses...boni?  whatever...should.).  Because of that, I plan to use it on something frivolous, like a Lambretta!  Yay.

I've also found a gent who owns a shop called Scooters Bellissimo.  Take a second to check out his site, and look at the link called "Wildcat".  ME-OW.

Anyways, he has a bridge piece for me that is currently in transit.  Hopefully it will be here soon!

Slowly things are coming together.  :)
Posted by Modrey at 1:05 PM No comments:

Today is a day full of yay.  Here's why:  I came into some Christmas money, all of which I plan on spending on the Lammy.  I also had two LCUSA members contact me today, one has a potential bridge piece and the other has a -cues drumroll- A POTENTIAL HORNCAST.  That would mean I would have all the body pieces, except for trim and lights and stuff.
Lambrettamas part 3 has come.  Sweet.
Posted by Modrey at 2:46 PM No comments:

So the blog has been dead, I know...  Not a lot has really been going on with the lammy, though.  I'm still searching high and low for a horncast.  There seem to be some half decent repros out there, but of course I would much prefer something original.  There is still the one in Italy on eBay, but I'm just not sure it's worth what the final price with shipping would be.

I did get my headset bottom from the gent in Oregon.  It looks really good...  it doesn't *quite* match up with the top perfectly...I'm not sure how big a deal that's going to be.  I seem to remember this being a common theme, though.  I like to keep faith that everything will work out somehow eventually.  :D

The people on the LCUSA forums are super friendly though, so that's a plus.

So as facebook has already heard, I got my awesome Lammy-swag in the mail yesterday.  This also grants me access into the members-only section of the LCUSA forums.  I'm part of the in-crowd!  Yeah!

I also got a notice in the mail today that something has arrived to be picked up.  Seeing as I already got the other package I was waiting for, this something can probably only be one thing.  I'm so effin excited. 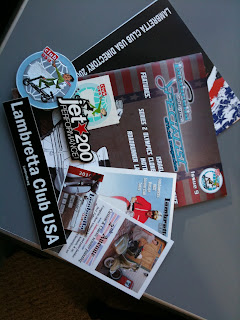 Here's a pic of my swag, it includes some stickers, a patch, an issue of The Specialist, a membership directory, and some handbills for various lambretta/vintage scooter businesses.
That's all for now.
Posted by Modrey at 1:36 PM No comments: 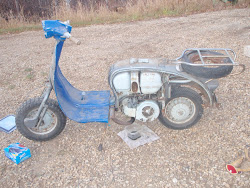 What happened last week on Glee:

Modrey
I'm all SORTS of awesome.